An inter-house basketball tournament was organised by the sports teachers- Mrs. Jennifer Cleopas, Mrs. Chandrika Goyal and Mr. Mohsin Khan under the guidance of the Principal, Sr. Sheena. The initial knockout matches were played on 5th, 6th and 7th November 2019 between the four houses- Gandhi, Nehru, Tagore and Shastri. The two houses that made it into the finals were- Gandhi House (leading with 6 points) and Nehru House (with 4 points). All the matches were quite interesting. But the Final Match played on 13th November 2019 between the top two teams was quite close and thrilling. The Winner of the Tournament was the Gandhi House Team under the leadership of Mahima (team captain), which had not lost a single match in the entire span.

After the final match Sr. Principal gave away the prizes to the proud winners and the runners-up. Sr. Sheena appreciated their efforts and congratulated them for their teamwork and sportsmanship. Sister also encouraged them to work harder and win many more matches.

13th November 2019 was an occasion of double celebration as Sr. Kiran Jojo, the headmistress handed out the certificates and medals to the winners of the CBSE Gymnastics National Championship held at Allahabad (from 7th to 10th November 2019). Meghanshi (XI Arts) secured a Silver Medal on the Balancing Beam in the under 17 category and made the School proud of her feat. The School Team escorted by Mr. Mohsin Khan also won the Silver Medal in the Team Championship Competition at the National Level. The proud team members are: Meghanshi, Paridhi Sharma, Aryanshi Jadia and Hoonar Tiwari.

This also happens to be the School’s maiden forage into CBSE Gymnastic National Championships. 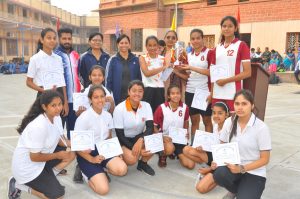